The answer to that question is simple: everyone. What I mean with this is that there are two very distinct groups of luxury watch purchasers: the collector and the basic “watch fan.” The collector is the man who spent the past 15 years residing on TimeZone along with also the PuristS, the kind of man who hears the title Walt Odets and understands exactly who I’m talking about. The collector is the type of man who understands the distinction between hand polished and handmade. He’s gotten well past the point of arguing about brands and knows enough to discuss individual projects. He reveres Patek Philippe for exactly what it meant to watches within the last 100 decades, understands the importance and appeal of vintage Rolex, but purchases just what talks to him. A watch lover, on the other hand, is someone who may be a little newer to high-end watches, and is still very brand conscious. Both purchase watches from Audemars Piguet, but likely different models, and certainly for different reasons.Let’s start with the collector. The collector buys Audemars Piguet Watches Used Replica due to its own history in great complicated pocketwatches. The collector buys AP because when Patek Philippe needed some assistance on the complex repeater of this Henry Graves Jr.. Supercomplication, it turned out to AP. The collector buys AP due to watches like this, this, and this.

Historically a favourite complication of Audemars Piguet, the perpetual calendar was the centrepiece of the brand’s SIHH 2018 line-up with the Royal Oak RD#2 Perpetual Calendar, now the world’s thinnest.

Just 6.3mm high (in the Royal Oak case at that; perhaps slimmer in a round, knife edge case), with the movement thickness 2.89mm, the Royal Oak RD#2 is the slimmest perpetual calendar on the market by quite some margin. 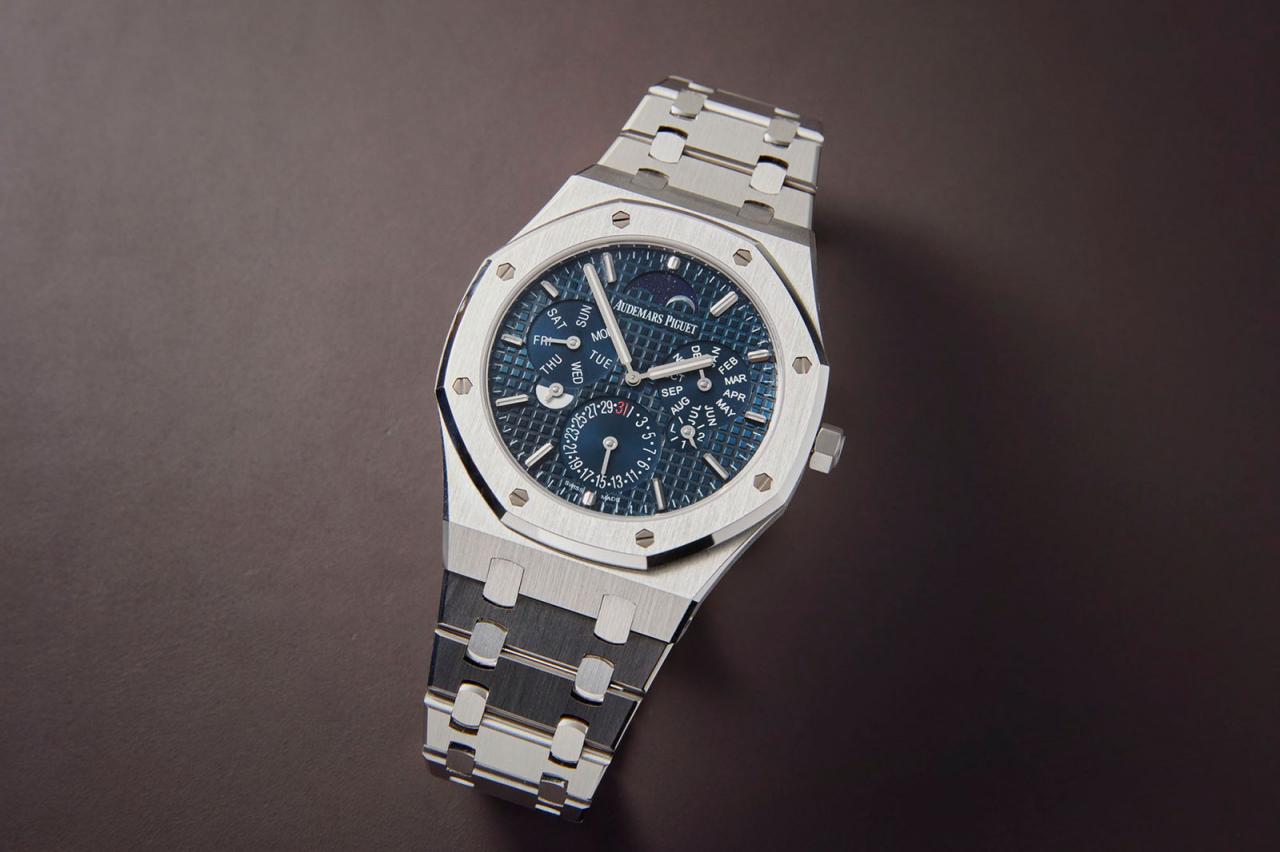 Most slim perpetual calendar watches hover around the 8mm mark, case and all. The Vacheron Overseas Ultra-Thin Perpetual Calendar is 8.1mm, while the Patek Philippe ref. 5940 is 8.48mm.

AP’s representatives repeated several times the cal. 5133 inside the RD#2 was akin to turning a three-storey house into a single floor, though technical specifics were short.

Rather than a revamp of the fundamentals of the perpetual calendar, the movement’s constructors slimmed and simplified each part of the movement, while laying out the calendar display in the most mechanically concise manner possible. The cal. 5133 is made up of 256 parts, compared to 374 parts in AP’s cal. 5134, or the 275 in Patek Philippe’s cal. 240Q.

That also means some of the calendar mechanism is spread out, rather than stacked up, explaining the relatively large 32mm, or 14 3/4 lignes, diameter of the movement. That’s quite a bit larger than the conventionally constructed and thicker AP cal. 5134 that’s 29mm, or 12 3/4 lignes, wide.

The automatic base of the cal. 5133 is derived from the cal. 2120, the longstanding thin movement found in the Royal Oak “Jumbo”. Highly regarded as a sophisticated construction that has remained in production for over 50 years, the movement was originally the Jaeger-LeCoultre cal. 920 and also supplied to Patek Philippe and Vacheron Constantin. One of the most distinctive features taken from the cal. 2120 is the support ring for the rotor to minimise wobbling and stress on the short pivot. 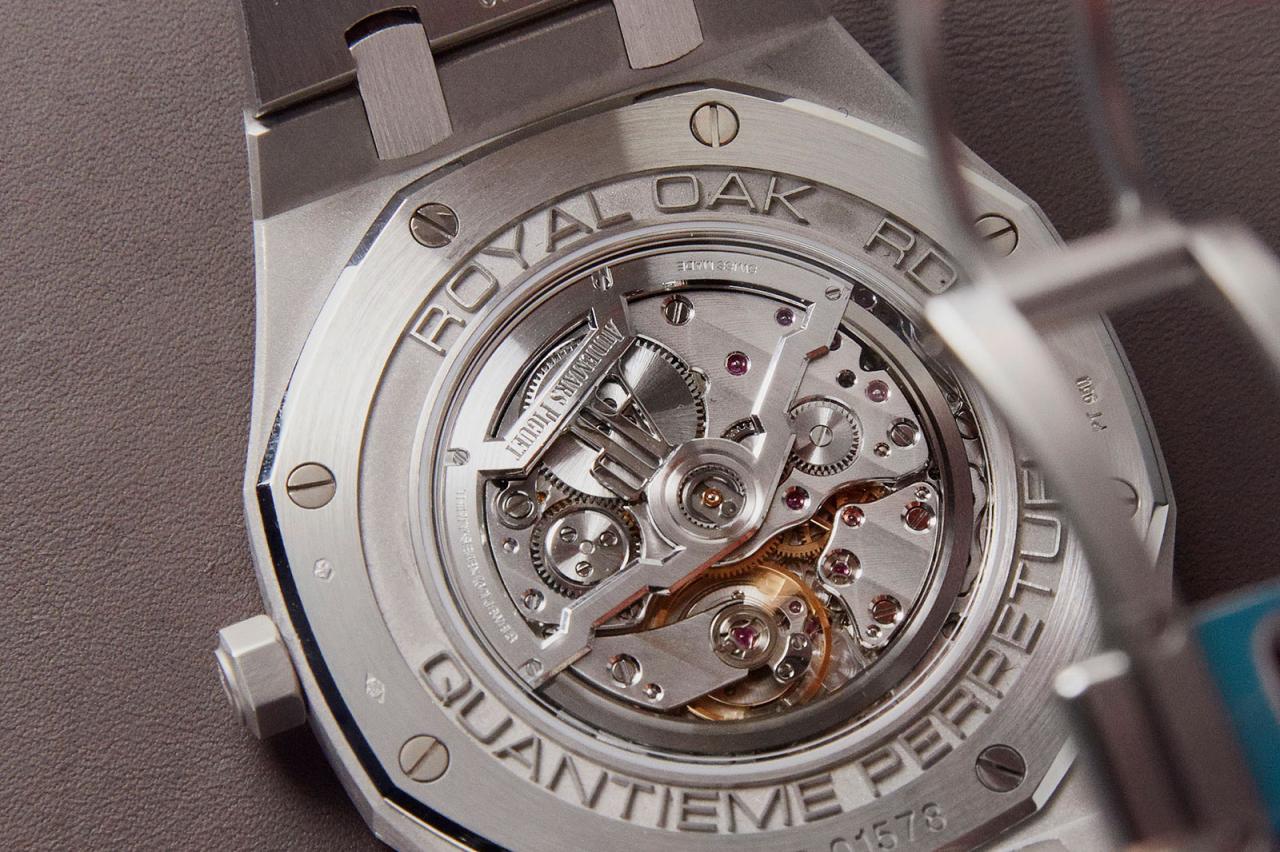 Like the cal. 2120, the cal. 5133 also minimises the components needed on the dial-side of the movement, utilising a hanging barrel for instance. That means the dial also serves as a main plate of sorts, helping to secure the parts in place.

Despite the significant technical advances inside the watch, the outside looks and feels very much like a classic Royal Oak, meaning it’s angular, refined and sharply finished. It is a departure from the aggressively styling of AP’s other concept watches, the Royal Oak Supersonnerie and Laptimer Michael Schumacher. 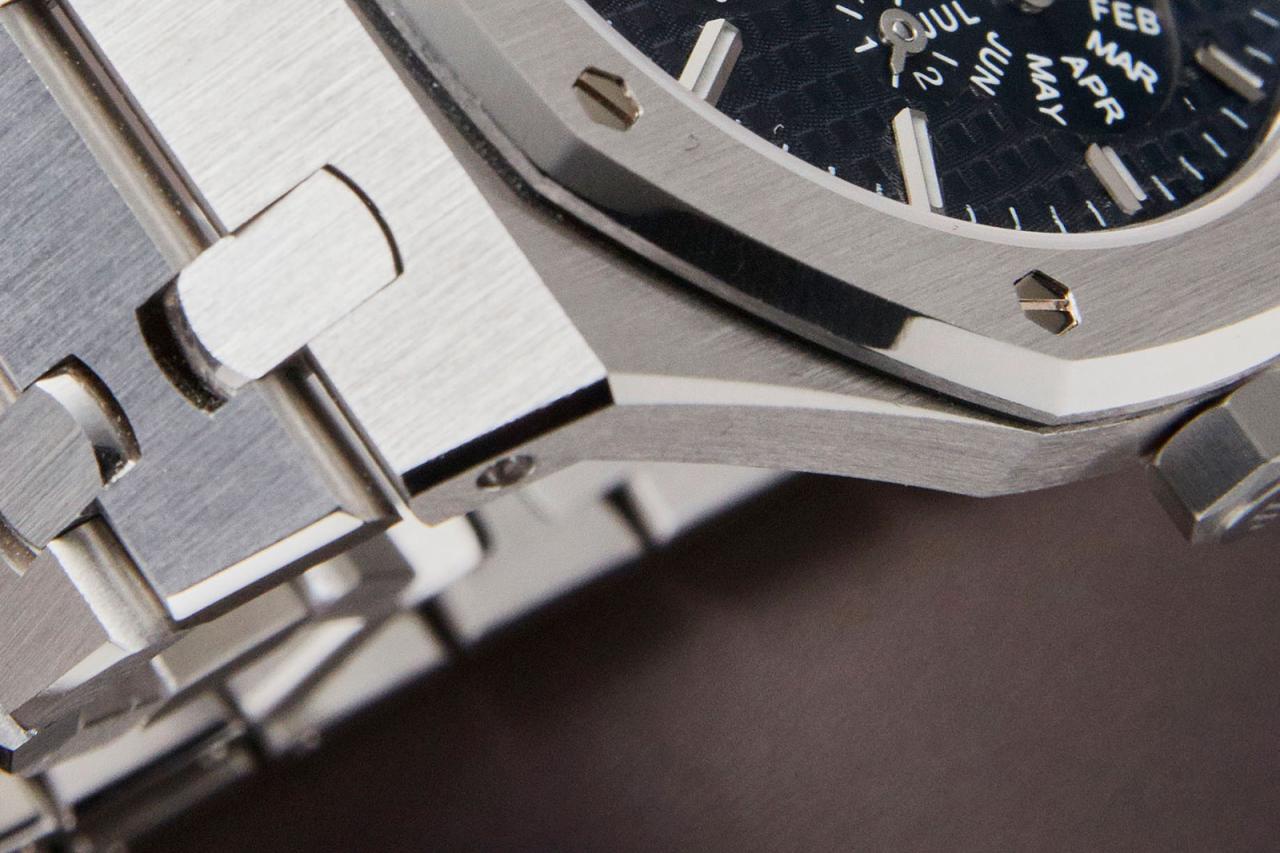 The case is 41mm in diameter, but hefty despite being slim, due to the platinum case and bracelet. And though it’s almost a quarter thinner than the ordinary Royal Oak perpetual calendar, the decrease in height is not dramatically obvious on the wrist, perhaps because the watch was already thin to start with. 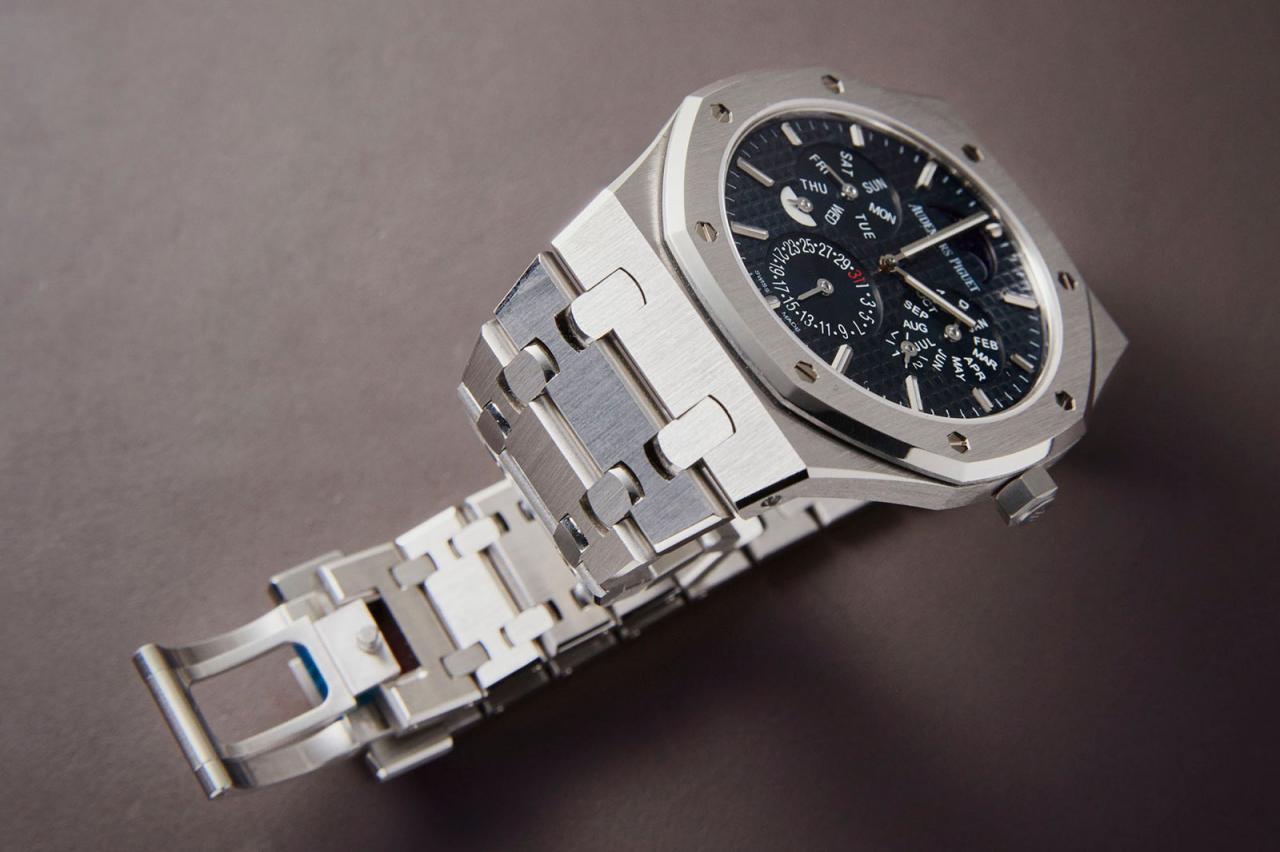 The dial is typical Royal Oak, dark blue with a chequerboard tapisserie guilloche. A casual observer would be hard pressed to distinguish between the RD#2 and an ordinary perpetual, though the differences are obvious, most prominently with the raised position of the sub-dials at three and nine. 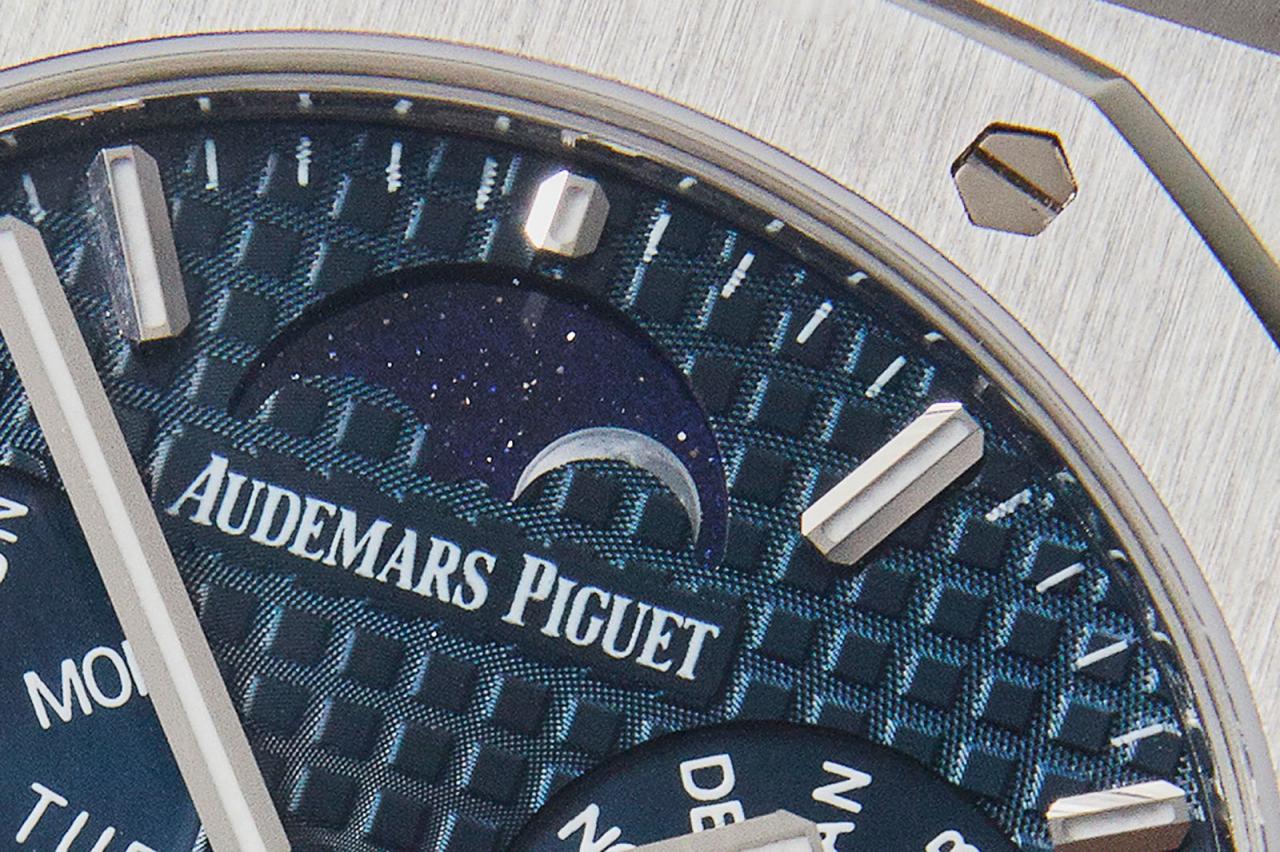 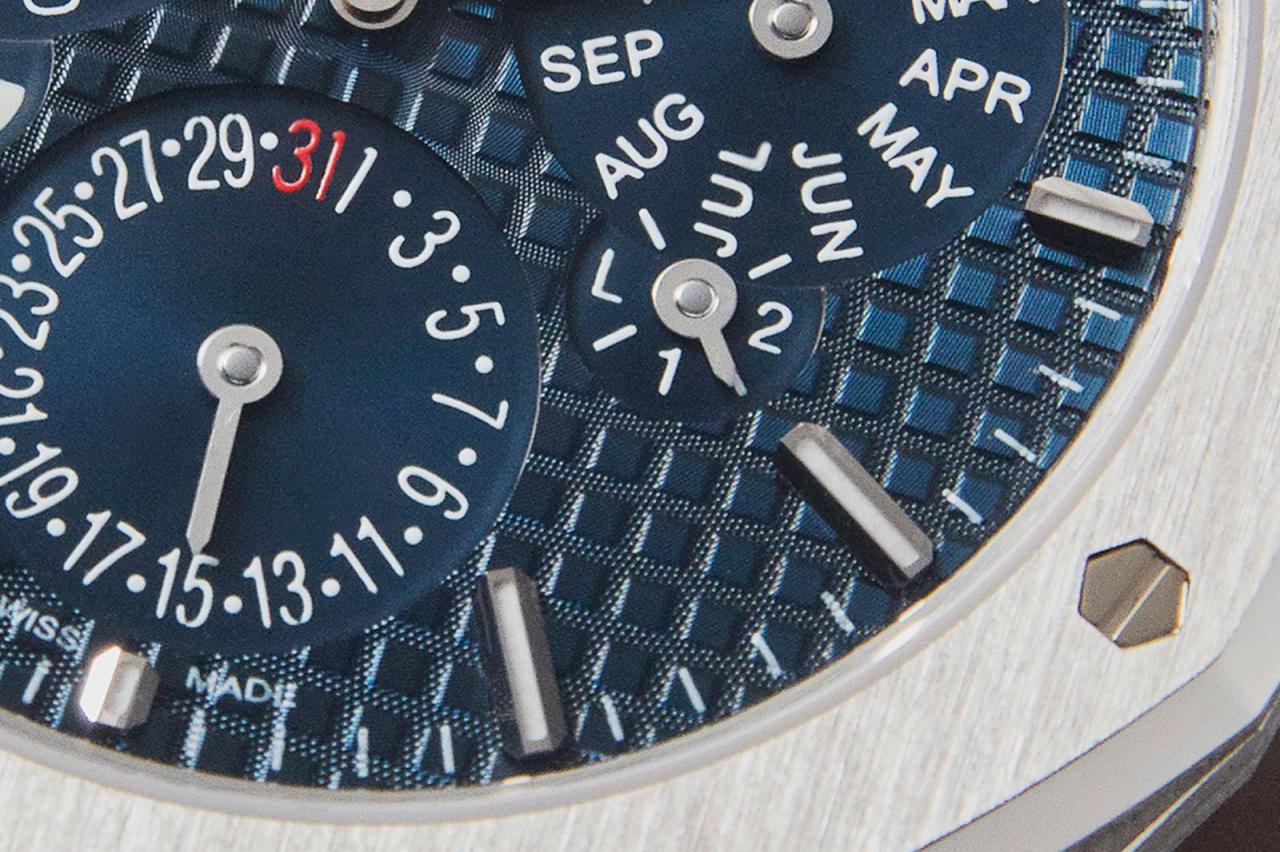 The Royal Oak RD#2 Perpetual Calendar (ref. 26586PT.OO.1240PT.01) is still a concept watch, with pricing and availability yet to be announced.