This is a watch that is known to many of youpersonally, it may not require much of an investigation — but this is HODINKEE and you’ll be able to believe you’re gonna get you. The Royal Oak Chronograph is a wristwatch which has tens of thousands of lovers the world over, and a couple of detractors, also. The Royal Oak and Royal Oak Offshore families frequently appeal to very different individuals, but I will get to this soon. Within this review, I handle a mainstay in the AP lineup, along with an interesting bit of haute horology, though one with no in-house movement. I will look at just how this 41mm column-wheel, vertical clutch chronograph wears, and if the issue of where the motion came from is even something worth noting in any way. That is the HODINKEE Week On The Wrist with all the Audemars Piguet Royal Oak Chronograph, and it is one worth spending some time with.AP is really a unique watch manufacture. It’s among the few global haute horology brands which stays in the hands of its founding family, with several members of their Audemars family still sitting on its board. Consider the simple fact that Vacheron Constantin and A. Lange & Söhne are equally owned by the Richemont Group (which owns everything from Cartier and Panerai into Alfred Dunhill, bag manufacturer Lancel, women’s clothing company Chloe, Purdey Guns, and Net-A-Porter), and Patek Philippe, while keeping its independence, has been sold to the Stern family less than 100 years ago. But, the possession of AP is not always the most interesting side of this 175 year old fabrication — the question that matters is that buys AP’s watches?

The Audemars Piguet Royal Oak Extra-Thin The Hour Glass Edition is the first and only Royal Oak “Jumbo” ref. 15202 produced in 18 ct. yellow gold – arguably the most classic metal for the Royal Oak aside from steel. To go with the yellow gold case and bracelet, the dial is a dark green, with the hands, hour markers and applied AP logo also in yellow gold. And most notably, the hexagonal nuts on the bezel are also yellow gold, instead of the conventional white gold.

Made in a limited edition of 50 pieces, this has the same specifications as the regular production Royal Oak Extra-Thin, which is available only in steel or rose gold. The case is 39mm wide and 8.1mm high. Inside is the calibre 2121, which has a rotor engraved with the logo of The Hour Glass and “One of Fifty”. 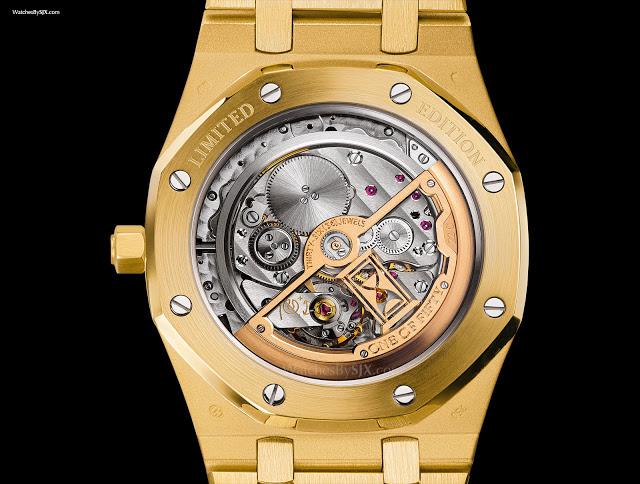